I remember thinking when Aiden was born that I was going to update in him monthly…well, 10 months later and I’ve failed terribly! >:(

Life’s been crazy with an active baby around the house and somehow blogging has been pushed to the back burner. Now that he’s becoming a lot more independent I’m hoping to be able to focus a bit more time to blogosphere because I miss it…and all of you! So hold me accountable, ok? 🙂
Anyways, little man is 10 months old! Holy crap, I can’t believe that I need to start planning a first birthday party soon. Sheesh, it makes me kind of sad how quickly this has all went by.  We’re so lucky to have the sweetest, most good natured kiddo ever. Like seriously, dream baby (well, everything except for his sleep, but it’s getting better).

How He’s Grown – We finally had his 9 month well baby visit and little man is long and lean. He’s weighing 18lbs, 12 oz and at a height of 29 inches. He’s 30% percentile for weight and 75% percentile for height. The weight gain has slowed, as has the height. Being lean and tall, has made it difficult at times to find pants that are long enough, but not too loose around the waist. 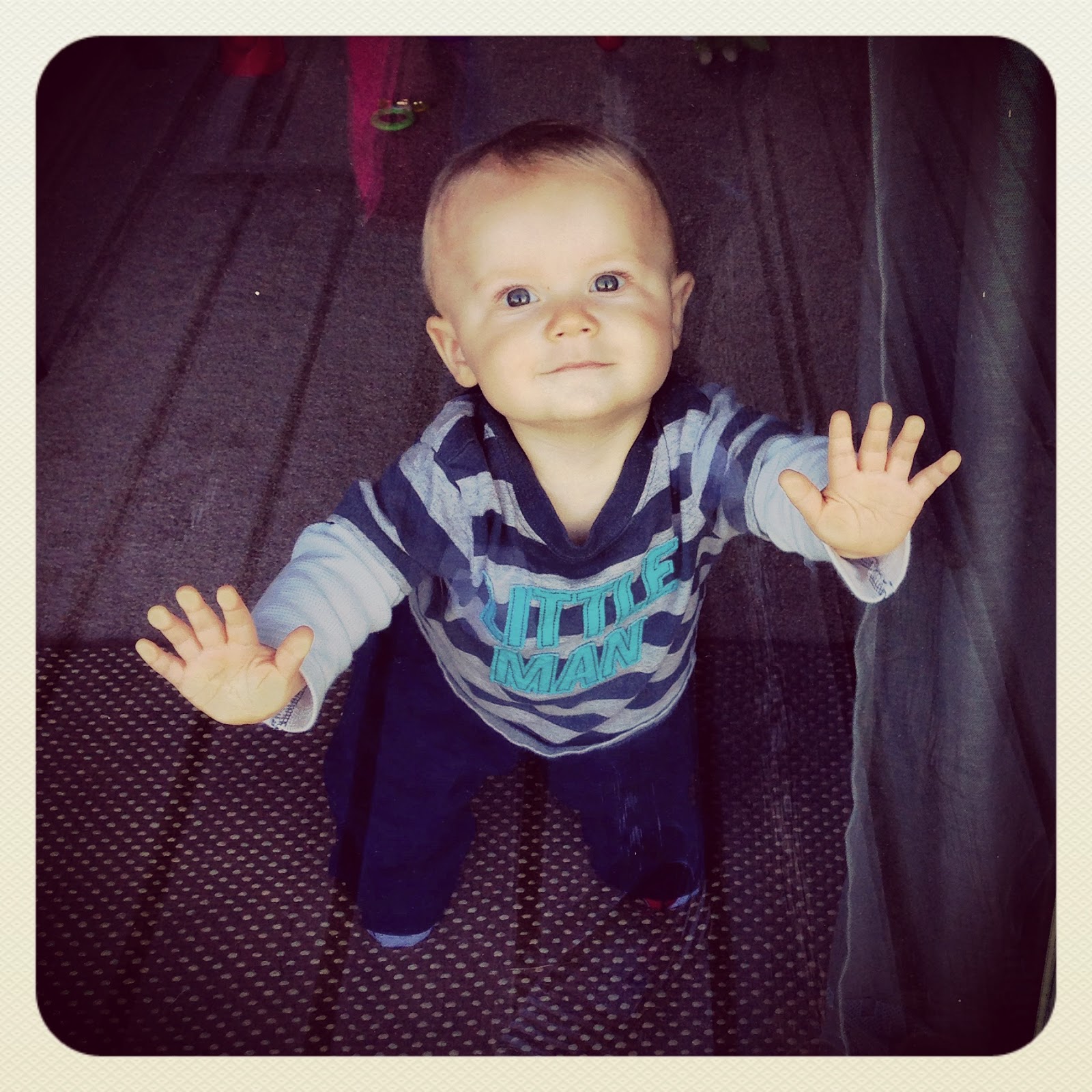 How He’s Sleeping – This is by far the most inconsistent thing in our life right now. Some nights he sleeps the whole night through, others he’s up every two to three hours. Lately (the past week), he’s been sleeping through the night more often. The downside, he’s been up at 4:30-5:30, but I think Daylight Savings Time also is messing that up. We started having Ryan go in at the middle of the night if Aiden was waking often. He was getting into the habit of having to nurse every.single.time, yet wasn’t actually hungry.  Having Ryan go in to soothe him instead of me has made a difference and helped get Aiden into the habit of sleeping longer periods at night. The sleeping through the night has made naps a bit less predictable, and he’s for the most part dropped to only one nap a day. I miss that second nap, but won’t complain since I’m finally getting sleep at night!

What He’s Eating – More like, what isn’t he eating! He loves food…he’s definitely our child. Haha! He’s definitely not interested in eating baby foods anymore and wants more texture and to be able to feed himself. This past month, he’s had a large interest in using the spoon and helping us guide it into his mouth. A few favorites: Popeye’s pasta (creamed spinach sauce), oatmeal with fruit, tomato soup with rice, ravioli’s, black bean burgers, & hash browns.

What He’s Doing – He’s speed crawling, pulling up on everything, taking a few steps behind his walkalong toys, cruising along furniture, opening drawers, “reading” his books and really enjoying us reading to him. He’s started to really become attached to a few toys and we had a minor blip when I left his lovey at my parents house! Thankfully his Papa came and dropped it off the next night! Phew! His favorite word is still “Mama”, but “Baba” (dada) is following closely. Also starting to say “Hiiiiii” and “buh buh” for bye along with waving. 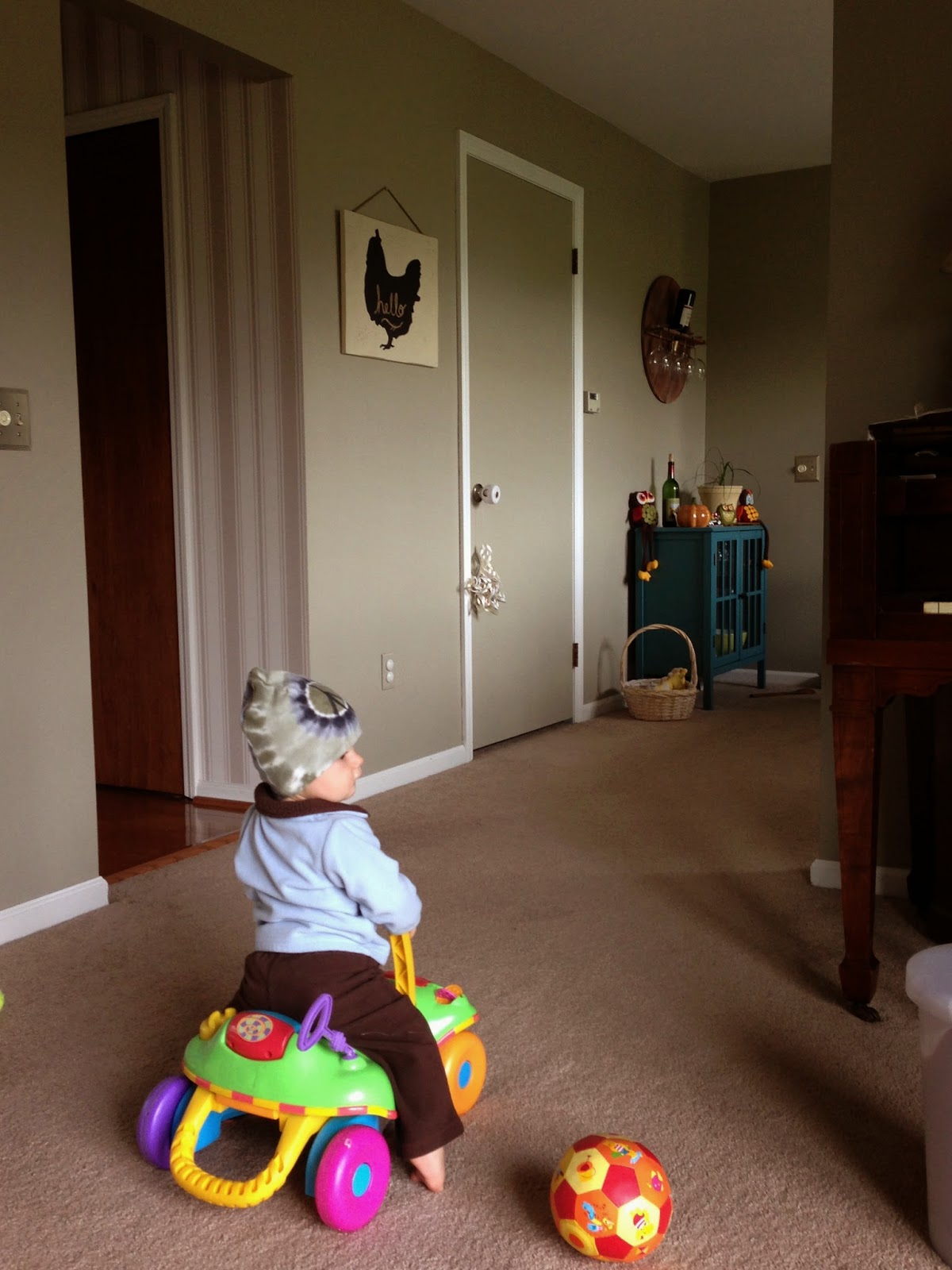 What He Loves – He absolutely adores his frog lovey from Carters. He has to go to bed with it each night. Also, his tiny tiger toy from Garanimals, Kohl’s Cares dolphin stuffed toy, soft blocks, ball table and anything with wheels. It’s so cute to watch him push the cars and trucks around. He’s still digging his Fisher Price rain-forest Jumperoo as always.

What Else – Him and Maverick, our shihtzu are starting to become friends. Mav’s still a bit reluctant at times, but Aiden’s trying his best. Aiden’s taken to feeding him from his high chair and always trying to give him toys. It’s adorable. 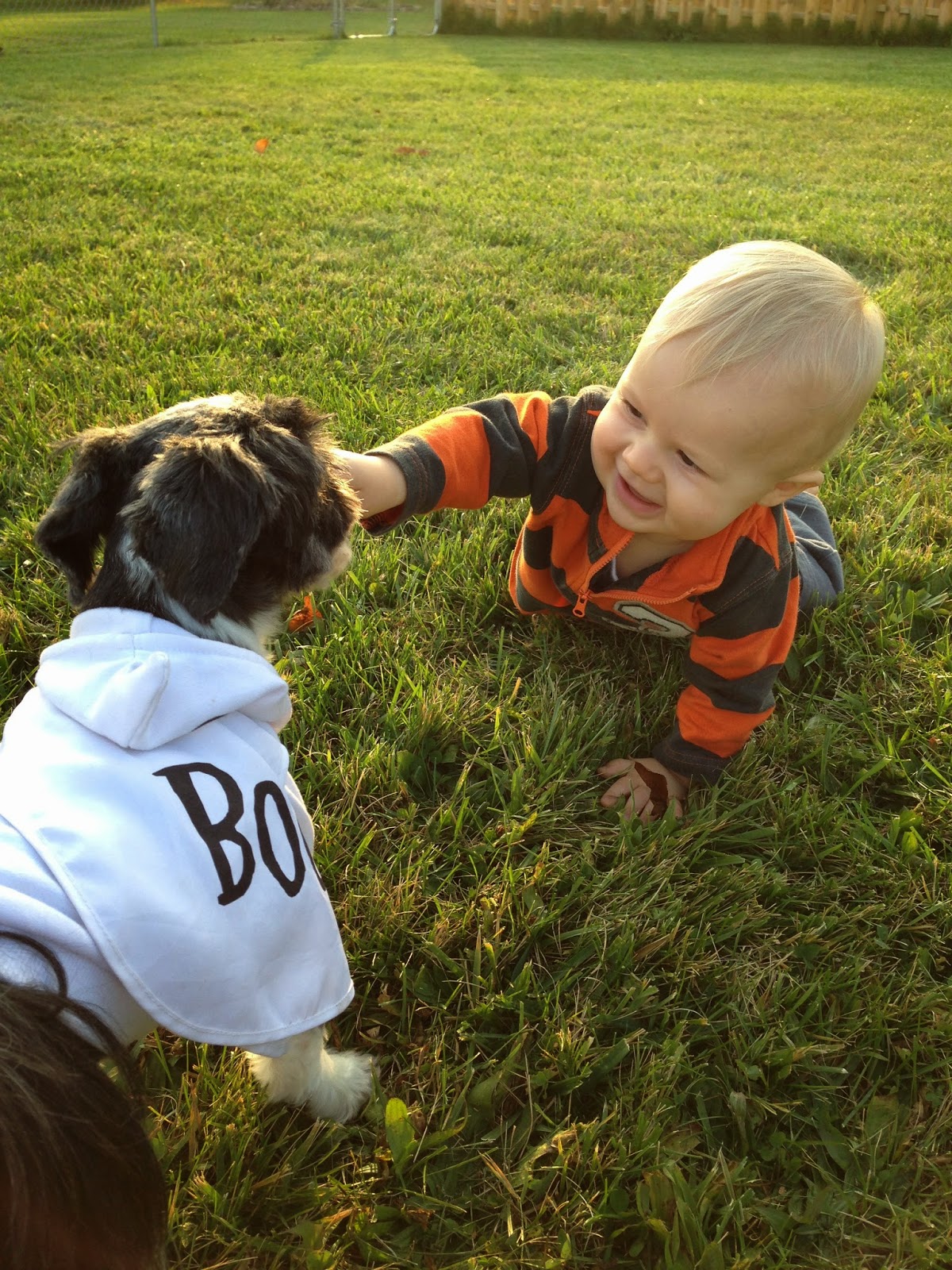 We celebrated a good friends daughters first birthday! I always like to say that this is Aiden’s future girlfriend! 😉 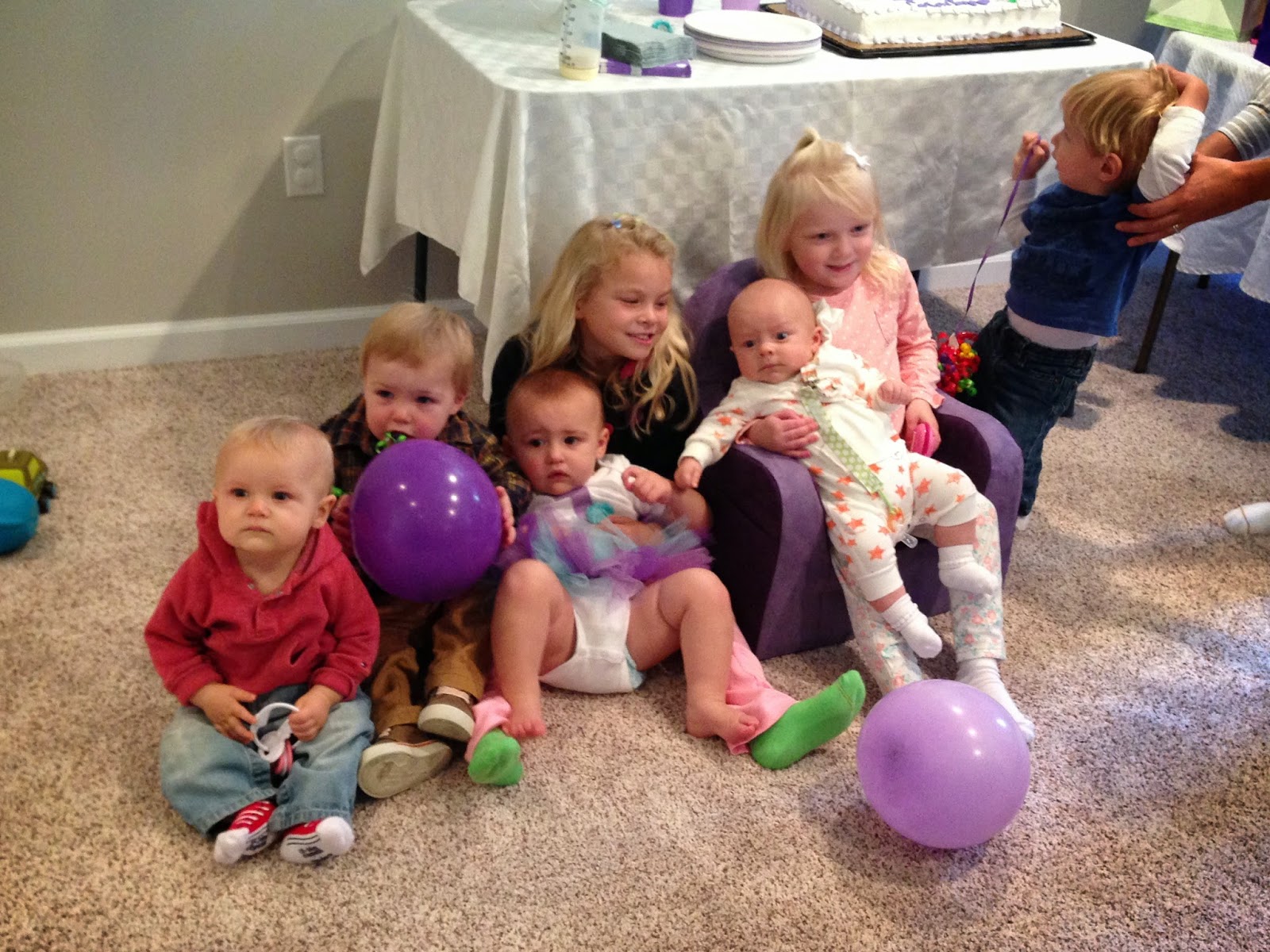 He also spent a day in downtown Detroit with his daddy watching me cross the finish line at the Detroit Free Press marathon where I ran in a relay team. 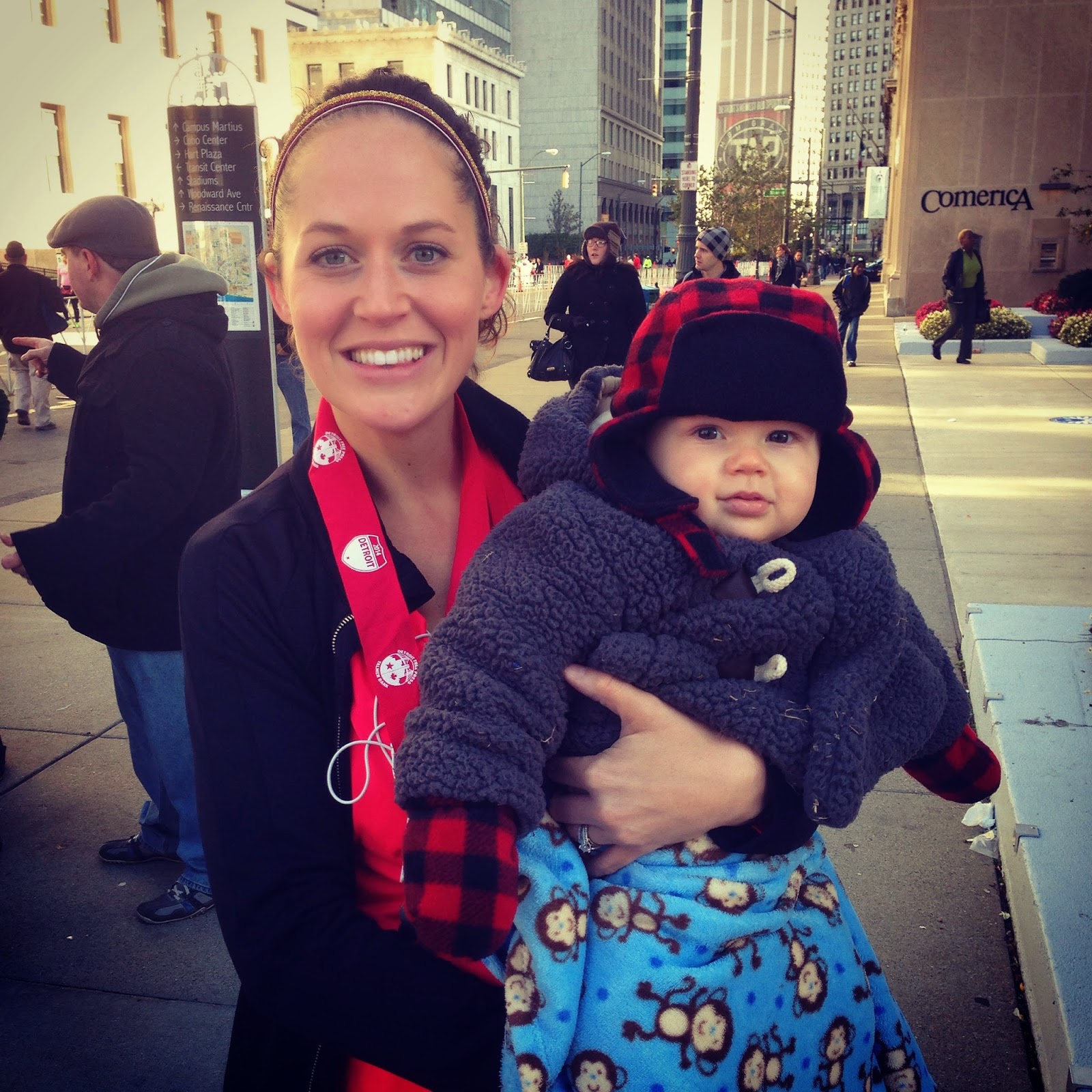 We also had a fun playdate at the beginning of the month at the Pumpkin Patch with a bunch of friends at Spicer Orchards. It was so great to see everyone and get all the babies together. I’m hoping to continue this and hopefully not go so long without seeing everyone. 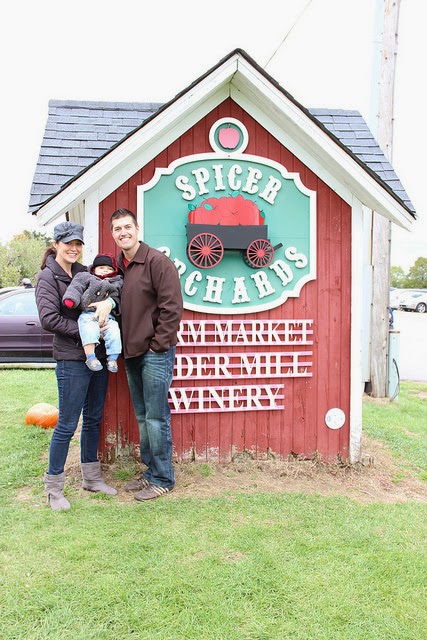 I can’t believe that we are less than 2 months away from a first birthday. I wish we could slow time down because it’s flying by in a blur. I’m not ready for my baby to be a little boy!