I know that we all rang in the New Year a week ago, but life’s been busy so I’m just now getting to thinking about all that has happened in the past year and deciding on my resolutions and goals for the new year. I honestly cannot believe that it’s already 2013. I feel like the past year FLEW by.

This past year was a crazy one for us. When I think back about everything that happened I can’t believe it was only one year. Some of these things feel like they have forever ago already.

Below is a monthly recap of the events of 2012 (to remind myself f things that happened I did what any normal 80’s child does — reference Facebook to remember my own life -lol):

January –
– We spent the early hours of the New Year ringing celebrating in Detroit at the Resolution Ball with a couple of our closest friends. Such a good time and upbeat way to begin the year.

– I left my job of the past 4 years at the pharmacy and started my internship as a Public Health and Wellness Intern at Central Michigan University – University Recreation. I spent the next 4 months at this internship and met so many great and inspiring people in my time there and was able to gain so much real world experience. There were so many programs that I helped with and planned in the next few months. It was really bittersweet leaving my job at the pharmacy because of having to leave the friends that I made there. I still would love to get together with them all soon for a girls weekend/night. We also went from a 2 income household, to a one person since my internship was unpaid.
February-
-We put our house on the market which was really nerve-wracking! It was tough because we had no idea what we would do during that time if our house sold because we had no other home to live in yet and I still had my internship to finish (ended beginning of May). We listed the house with a realtor and also posted it on Craigslist, Facebook Marketplace, made it’s own Facebook page and literally told everyone we knew.
– I worked with Bry at my internship and helped her with planning programs for the month for CMU’s campus dealing with healthy relationships and body image.
– We began looking at houses downstate which was stressful because we lived 2 hours away and they were flying off the market.
March-
-Continued house hunting, but took a bit of a hiatus since we couldn’t really buy until someone bought our house.
– Rodney Atkins and Gloriana concert – we met them both
– This was my big month at my internship for all my nutrition based programs. I had a total of 22 events throughout the month so it was busy.
– Someone was interested in our house! Ryan actually knew him from the gym so we showed him the house (sans our realtor) and worked out a deal. We began the paperwork and managed to work a deal for a lower commission with our realtor since we did most the work and this was great because he wanted to move in at the beginning of June. It was a relief to sell the house without losing a profit. 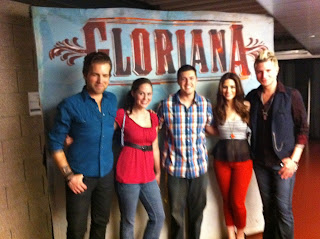 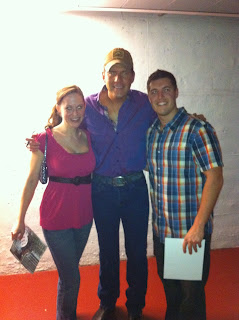 April –
-Organized a fun run and walk 5k at my internship. It was a dreadful, wet and cold day, but we still had fun.
– We found a house to buy, put an offer in and THEY ACCEPTED. Such a relief because we were beginning to be really stressed about it. The only problem…they weren’t ready to move out until later summer and we moved end of May… 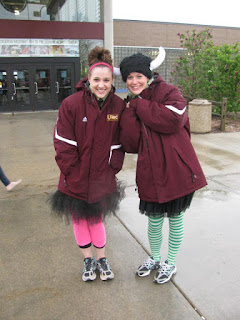 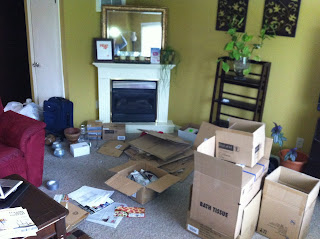 May –
– Moved! We actually moved to my parents for the next 7 weeks because we couldn’t move into our new house yet. We still didn’t even know what day we would be able to move in. We stored everything at my parent’s in their huge garage, and lived in a camper in the driveway. Lol. We’re lucky to have had a place to live that short period of time because with a dog and not knowing how long we’d be there we had no way of getting an apartment. So a big THANKS to my parent’s for really helping us out in a bind. Ryan worked everyday on my parents inside porch area. So thankful he has a job that allows him to work anywhere as this made life a little less stressful.
– I read….a LOT. Since I didn’t have a job yet, I spent a lot of time reading, enjoying family and started running a lot. 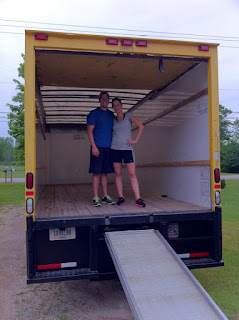 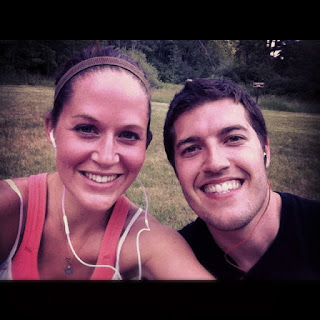 June –
– Continued living at my parent’s while beginning to job search.
– Signed closing paperwork for the house so officially homeowners again.
-Anxiously waiting to find out our move in date (drove us crazy)
– Mid month I was trail running and sprained my mid foot terribly on a tree root. I couldn’t walk for weeks without pain. Still 6 months later and I can feel it at times. SUCKS! I was so upset for awhile.
– Tiger’s game with friends. 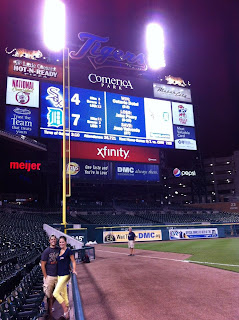 July –
-Still waited forever to find our move in date….finally moved in Mid July. The move went smooth, but of courses it was the hottest day of the summer.
– Lots of house projects.
-Camping with friends.
– Finally found a job! I began at McLaren Medical Center at the end of July working in their pharmacy. 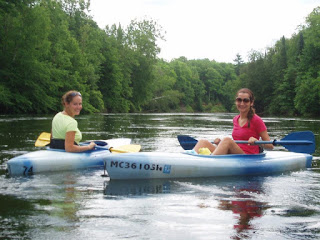 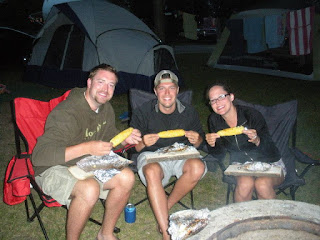 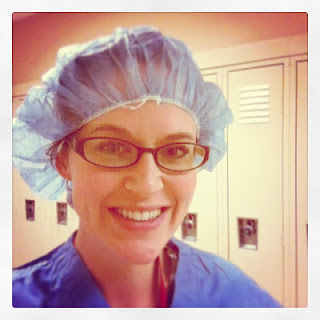 August –
-Transitioning to new home and getting unpacked
– Training in new job.
– We went on a roadtrip with one of my girlfriends from college, her boyfriend and their couple friend and went to West Virginia to go rock climbing. It was amazing! I loved every second of it and would do it again in a heartbeat. More about it here.
-Celebrated our 3rd wedding anniversary. Ryan surprised us with Jason Mraz tickets. Love seeing him live. 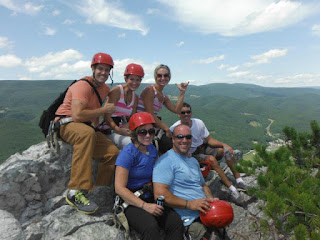 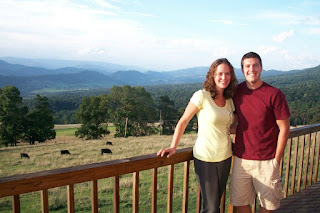 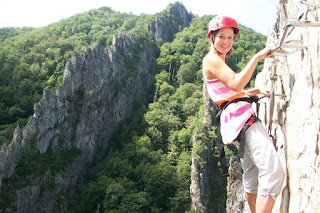 September-
– Life finally started slowing down. We just enjoyed our new home. Worked on some small house projects, but nothing huge.
– Renaissance Festival with the hubby 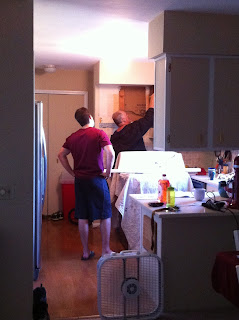 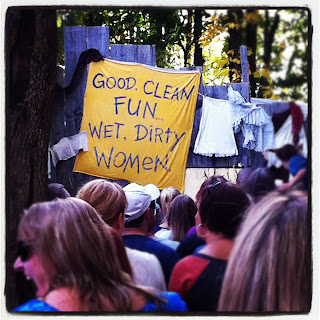 October –
-Run4Wine Race
– Ryan landed a great client for his personal business. So thankful for how hard of a worker he is. 🙂 He’s done so well with his side business, and balancing that with his full time job. I don’t think I know anyone else who works as hard as he does. 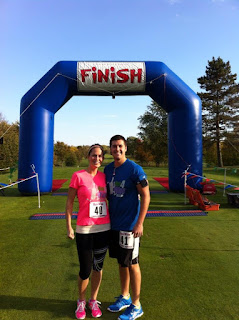 November –
-Ryan totally surprised me with a surprise 30th birthday party! I had NO idea. He got our closest friends together at Lucky Strike in Novi and we spent the night catching up and bowling. I loved it!
– We spent a lot of time working on our living room area and I blogged about it here.
– I worked Thanksgiving so that was lame.
– Started doing yoga again, and joined the #yogaaday movement. 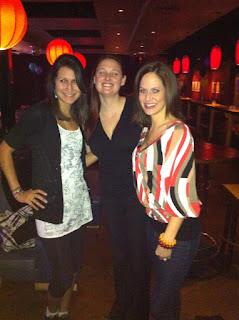 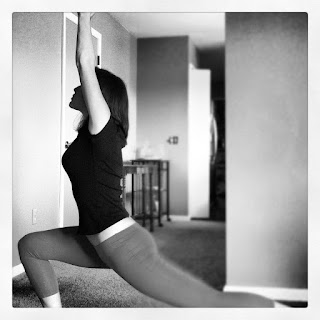 December –
-I have no idea where this month went. I worked a lot, baked a ton and prepped for Christmas.
– Spent Christmas eve my father in laws, Christmas day with my parents, large family get together and then a calm evening in for New Years Eve. After the whirlwind year we wanted to ring in the next calmly.
I expect that 2013, may be a bit calmer at first, but will likely end in a whirlwind. That’s okay with me, calm can be boring so bring it on 2013. I’m really looking forward to spending this new year getting more settled and for everything that’s to come. I have a good feeling about this one. 🙂
Next post…resolutions and goals.
Was 2012 a crazy year for you? What moment stands out the most?
Spread the love
By Amber|2013-01-07T17:28:00-05:00January 7th, 2013|family|1 Comment