Oh my gosh, I’m the worst at this. It’s not that I don’t think about it, it’s just that I feel like I’m busy all the time and have NO energy, or need to conserve it to get other things done around here, especially before baby boy makes his appearance.

Weight Gain: I’m up about 25 pounds at a little over 8 months pregnant. It’s literally all in my belly and boobs. I can still fit into a few pair of my non-maternity jeans if they are low rise. I know for some that is nearing the high end of the weight spectrum, but considering how small I was to begin with and the fact that I’m still active I’m not overly concerned, nor is my doctor.

What I’ve Been Eating:  I can finally eat chicken again as long as it’s mixed in with other things. After almost 7 months of avoiding the one food I used to eat all the time it’s great. Other than that I’ve been loving on salads with ranch dressing. And still loving on the sweets…I blame this all on Ryan and his sweet tooth which obviously is getting passed onto this kiddo. Greek yogurt with fresh fruit is another love. I can’t get enough of it.

How I’ve Been Feeling: I still feel pretty good. The worst part is just the fatigue. At the end of every work day I HAVE to come home and take a nap to re-charge. Start to really feel it in my feet at the end of the day. I can’t complain though considering it’s taken this long to start to become uncomfortable. I’m thankful for that. He is moving around a lot still, but it’s more shifting now than strong punches and kicks. It’s insane to watch my stomach move around and lately he’s been using my ribs as monkey bars with his feet and my cervix as a trampoline. No swelling yet and still have my wedding bands on. 🙂

Am I Showing Yet?: HA, yes, you could say that. The belly has fully popped! Although my fundal height is measuring behind and I get comments that I look about 5-6 months pregnant, not 8 months. My breast have also grown again…It’s becoming darn nearly impossible to find a bra that fits. Thank goodness for sleep and sports bras. 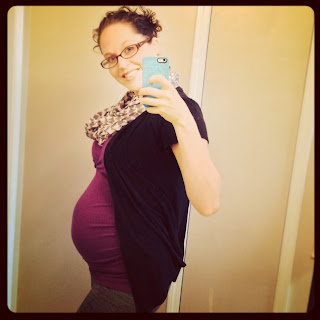 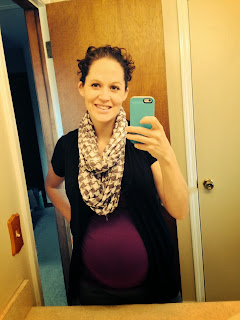 Any Other Symptoms: A few Braxton Hicks contractions now and then. Also noticed a bit of milk leaking…oh joy! At least I know everything is working.

Best Moment of the Week:  We had an ultrasound this past week and it was the first one since our 20 week growth ultrasound. It was re-assuring because at my last OB appointment I was measuring behind on fundal measurement by a few weeks, but the ultrasound showed that he’s actually about a week ahead in growth (weighing in at 4 pounds, 3 ounces already)! I’m wondering if our due date is going to change. The OB thought that I may measure behind because I have strong abdominal muscles so I may not ‘show’ as readily as some. Everything looks great for our baby boy and it’s all becoming so much more real.

What Else Is Left To Do: We still need to finish the last of the nursery, but it’s almost done (post pics when finished). I’ll be sure to post pics soon. Need to finalize our birth plan too. I need to send out thank you cards from my family/friends baby shower, but keep forgetting to pick up stamps (which I hope to blog about soon)!

It’s crazy to think that in a month it’s pretty much go time and that he could make an appearance! Time seriously flew, I feel like we just shared the news.