Clarkston Back Roads Half Marathon and 10k Race Recap

A couple weeks ago, Ryan and I ran the Clarkston Back Roads Half Marathon & 10k and I’m so glad that we decided to do this race. It was a really chilly morning, but the gorgeous sites during the run were well worth the initial chill.

I had been looking forward to this race for awhile, but as the date approached I was reluctant since just the week before I took a really hard fall while running. The sidewalks where I run are in terrible shape and I caught my toe while running and super-manned right near a busy intersection. I jacked up my knee, hip and hands in the process, but I think my ego was hurt more than my body, as motorists stopped to see if I was ok. LOL. Anyways, I was definitely feeling the fall a few days later and it made me a bit nervous about running the 10k.

The morning of the run was a chilly one, but it was a nice because this race has a later start (9:30), so it was beginning to warm up a bit and sun peeked out now and then as the race was beginning. I was shocked at how many half marathon runners there were. The start was a little confusing at first because it was difficult to hear what was going on, but after a few minutes everything was cleared up. I started in between the 9:00 and 10:00 pace, but wished that I had jumped up to a quicker corral. I think that I’ve been taking it too slow from the start during some races lately and it’s hurting my time. I’m always afraid I’ll push too hard and burn out before the end, but I think I need to push harder.

The course was super hilly and gorgeous. We looped around the lake and at one point passed a bunch of horses that were galloping around and right near the runners. It was really a cool thing to see mid-race. As difficult as hills are, I love them during races and the challenge they provide. The course was a mix of cement path, dirt road and small trails. The runners were all great about getting over and letting runners pass and there were fabulous volunteers throughout! I was really impressed at how seriously they took runners safety and how well marked the race path was.

I felt pretty good until about the 3 mile marker and my knee started bugging me. I kept pushing through it and eventually the pain subsided some and then went away completely! I felt like the last few miles of the race passed pretty quickly, I was really happy with my time, especially battling a mild injury and for not train all that much (I got a little relaxed on the training after the Free Press Marathon). There was a fun after party with the Clarkston Union Mac n Cheese (the best in Southeast Michigan), MIP beer (which tasted great!), live music and small fires to warm up.  This is definitely a race that I’ll be doing again and next time I’ll likely try to do the half marathon. I really loved that it was a trail run and all the great and friendly runners that participated. I think that I’m starting to prefer trail races a bit more than road races now. 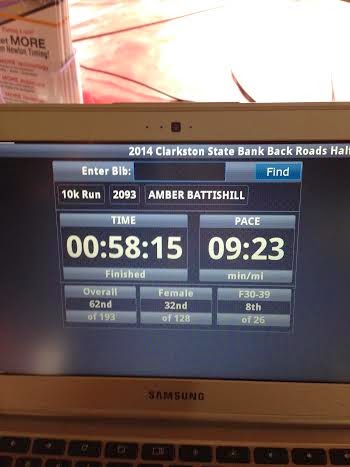