I don’t know about you guys, but this heat is unbearable to me.  We’ve been finding any and every reason to get out of the house for a bit.  This has ranged from anything, such as staying at work longer, restaurants, coffee shops (as I sit in Starbucks currently sipping on a Tazo iced passion tea- – yum!) and the gym.  I never thought that I would be so excited to go to the gym just to escape our A/C free, sweatbox of a house.
I’m definitely one of these people that don’t fair well when it comes to heat.  I don’t think that I could ever handle living in a southern area where high temperatures and intense humidity are the norm.  I guess I am a Northern girl at heart.  I’ve already experienced my fair share of heat exhaustion and heat stroke. 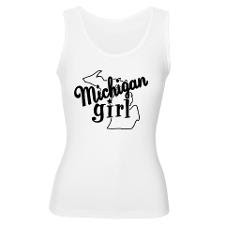 After a grueling, steamy day outside at the local fair and parade, my mom, aunt and I decided to hit up the local, large flea market.  At this events we had a tendency to meander our way around separately, checking out the stands we were interested in and meeting up an hour or so later. The last thing I remember is standing there and having the world close in on me and blacking out completely.  I woke up surrounded by tons of foreigners (this market had many Asian merchants/shoppers) speaking to me in their native tongue.  As if it wasn’t confusing enough passing out in a unfamiliar area, waking up to a bunch of strangers just brought it to a whole new level. I swear that I was there for half an hour or more completely out of sorts and no idea what really was going on. Finally, my family found me passed out on the floor with all these people surrounding spraying me with water.  It’s a funny sight to imagine now, but at the moment I was miserable.  It’s definitely something I would never want anyone else to experience.  The shivers, nausea, puking, dizziness and overall fatigue was terrible.    Needless to say, days later and lots of fluids and rest and I was back to normal.

Experience #2:
Every time I think about this story it makes me feel bad for Ryan (husband). We were on our first vacation that we had taken together as a couple and had only been dating several months.  We had spent the past day driving down to Florida (20+ hours), with not nearly enough sleep (certainly didn’t help)and had finally arrived at the hotel.  It was a super hot day and we hadn’t had much time to acclimate to the weather and I decided to take a hot shower.  I was in there several moments and BOOM! I was down and out.  Ryan rushed in to see what happened and I’m passed in the shower with my eyes rolled back in my head and a big cut on my knee from the fall down.  Poor boy didn’t know what was going on and thought he had a dead girlfriend (what a great way to start our first ever vacation together).  I finally came too and this time had a bit more of an idea what had happened.
The Moral of The Story:
Pay attention to the warning signs.  Stay hydrated and rested when temperatures skyrocket.  I had many of the signs of heat exhaustion, but dismissed them.  After dealing with this several times now, I’ve certainly become accustomed to learning what to expect and look for and most importantly LISTEN to what my body is telling me.  As much as I’d like to be out there and running and training for the upcoming Warrior Dash, I know that it’s not feasible in this weather. Instead I’ve improvised with gym sessions until the weather changes. 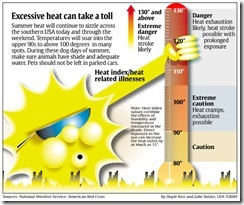 Signs & symptoms of heat exhaustion and stroke can be found at the CDC website. If you’re active in the summer it’s worth a look and can save your life or another’s.
Have you or someone you know ever had heat exhaustion or stroke? Do you like/dislike the heat?
Spread the love
By Amber|2011-07-20T00:49:00-04:00July 20th, 2011|health|0 Comments